The Bourke Street cycleway is a 3.4-km active transport corridor across a traffic-congested area of inner city Sydney, from Woolloomooloo to Waterloo.

Constructed by upgrading an existing shared route, the two-way separated cycleway provides improved safety, comfort, and amenity for people on bicycles and on foot, and for local residents.

The cycleway was the first large-scale cycling infrastructure project of its kind in Sydney. As a result, there are now five times as many bike trips along Bourke Street.

In addition to increasing the number of people riding to work along the route, the cycleway is also an active, green recreation site use by local families, leisure riders, and children travelling to and from school.

Multifunctionality: The planted median strip helps to cool the street as well as separating people on bikes and on foot.

A safe and attractive pathway network linking streets, parks, and open spaces is a vital component of the City of Sydney’s Sustainable Sydney 2030 goals, prioritising walking and cycling in the city centre. The Bourke Street cycleway is a showcase project for this initiative, allowing people of all ages and abilities to use a bicycle for transport and recreation.

The overall Bourke Street design took a holistic approach to ensure safety by using medians and curbs to separate cyclists from traffic, reducing both the speed limit and road space available to motor vehicles and developing “shared environment intersections”. These innovative crossings give right of way to pedestrians, and give equivalent rights to people on bikes and in cars within the intersection. 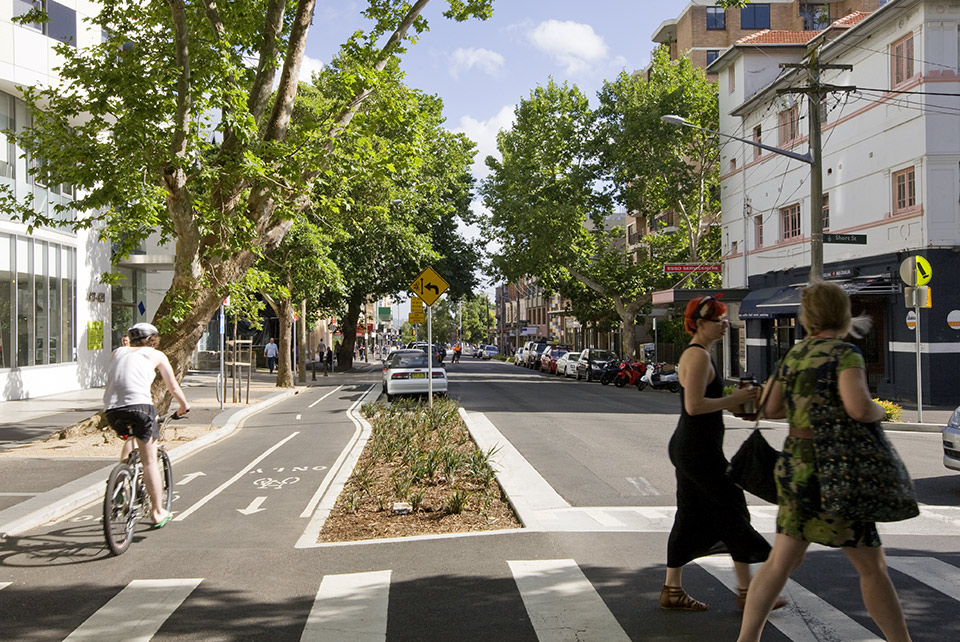 Integration: Intersections give right of way to pedestrians.

Collaborating on the design process

A collaborative design process was undertaken by the City of Sydney with project consultants, Roads and Maritime Services, and the local community. This enabled project priorities to shift from more traditional engineered outcomes to provide an integrated design response for the entire road corridor. Instead of an on-road engineered solution with no motor vehicle separation, the cycleway incorporates median plantings and urban design features that redefine the inner city streetscape.

The design evolved based on direct community feedback, including pedestrian crossings to connect local businesses, and a design adjustment calling for existing street trees to be preserved. A thorough community consultation process included four public meetings, and more than 800 submissions were received.

There was some opposition to the project, including concern about the loss of trees and car parking, and the broader impacts on the area. This was addressed by a dedicated project team through community consultation and media management. 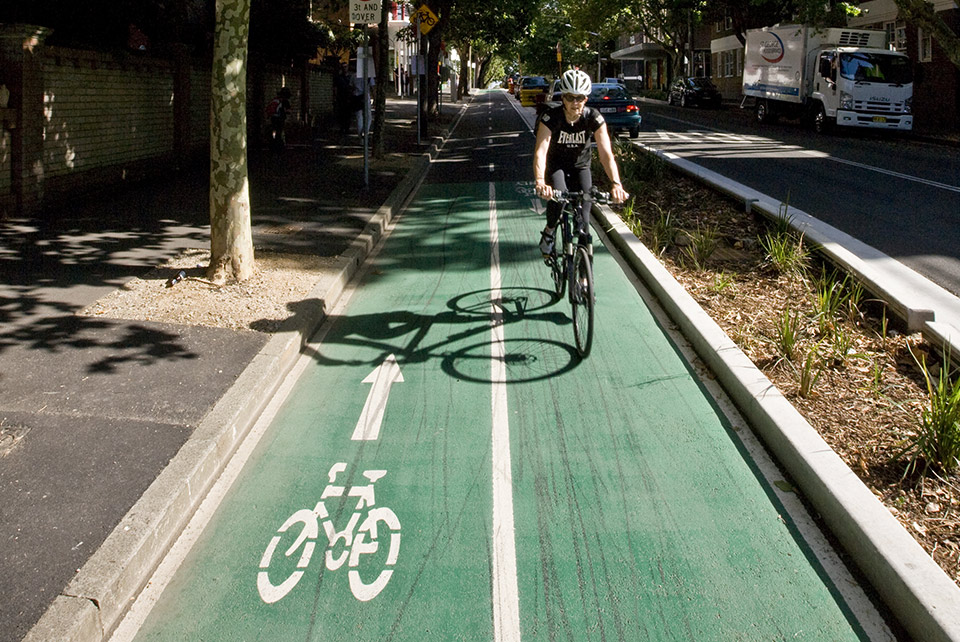 Participation: In response to community feedback, the design was adjusted to preserve a number of mature trees along the route.

The successful integration of the new infrastructure was assisted by council-run cycle training courses, targeted behaviour change projects, and promotional film and imagery of the route being used appropriately.

The Council of the City of Sydney

Inner city Sydney, from Woolloomooloo to Waterloo via Darlinghurst, Surry Hills, and Redfern

The project was a catalyst for improving the functionality of the street overall. It was guided by an overall strategy, which helped to communicate the long-term vision and allowed development to happen through a series of iterations.

Comprehensive community consultation took place throughout the design process and the implementation, and this also provided the opportunity for a unique campaign of education and awareness to promote cycling and safe behaviour by road users.

The role of landscape design was not only to create green buffers between the footpath and the cycleway, but it also provided a means for the Bourke Street community to express their horticultural, culinary, and ecological interests.

Despite the rigorous consideration of technical issues throughout the project design, the final result is very low key.