Sydney Park has been redesigned to incorporate landscape elements, waterbodies, and water features that make it a large-scale stormwater treatment system, capturing and treating run-off from the surrounding suburb.

The park now captures and cleans 850 million litres of stormwater a year, making this water available for re-use. At the same time, the reinvigorated park provides much-needed open space for relaxation and recreation in this high-density inner city neighbourhood. 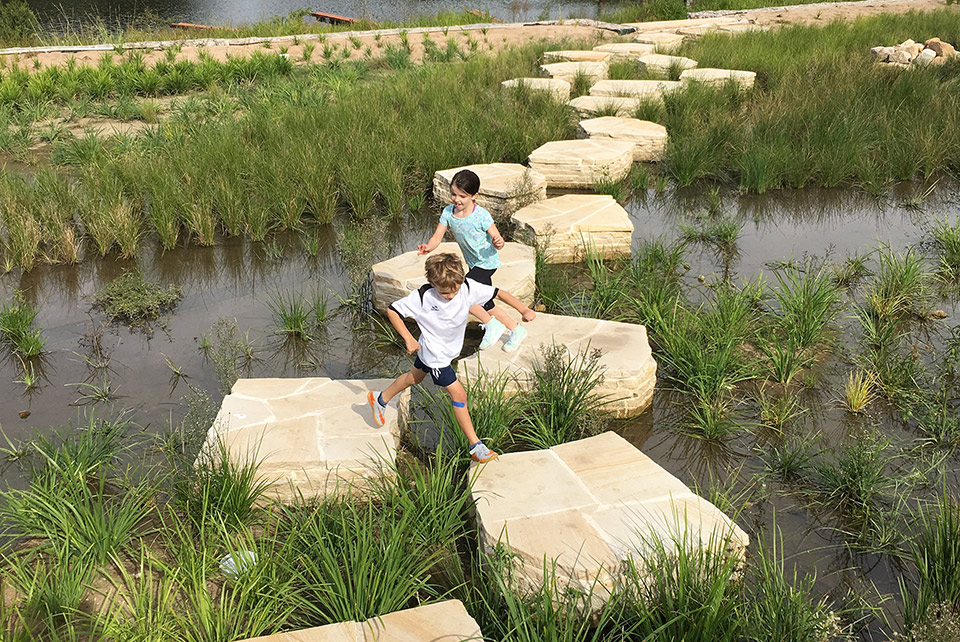 Connectivity: The stormwater infrastructure is a series of connected treatment systems that can also be navigated by park visitors.

Using the landscape to capture and treat water

The project is an integral component of City of Sydney’s Sustainable Sydney 2030, which aims to replace 30 per cent of 2030 potable water demand across the local government area.

The project’s success is due to its synthesis of the pragmatic and poetic aspects of the water treatment system, and its inventive integration with the park. Instead of constructing traditional greywater treatment infrastructure, the system was reconceived as a series of connected wetlands, cascades, spillways, and sculptural elements.

Integration: A series of tiered terraces aerate the stormwater.

Stormwater is fed into the naturalised system from a main drainage pipe which captures run-off from the adjacent suburb of Newtown. Footbridges, informal paths, and stepping stones are placed around the waterbodies, allowing people to explore and discover the various water treatment processes, now part of the park’s landscape setting. 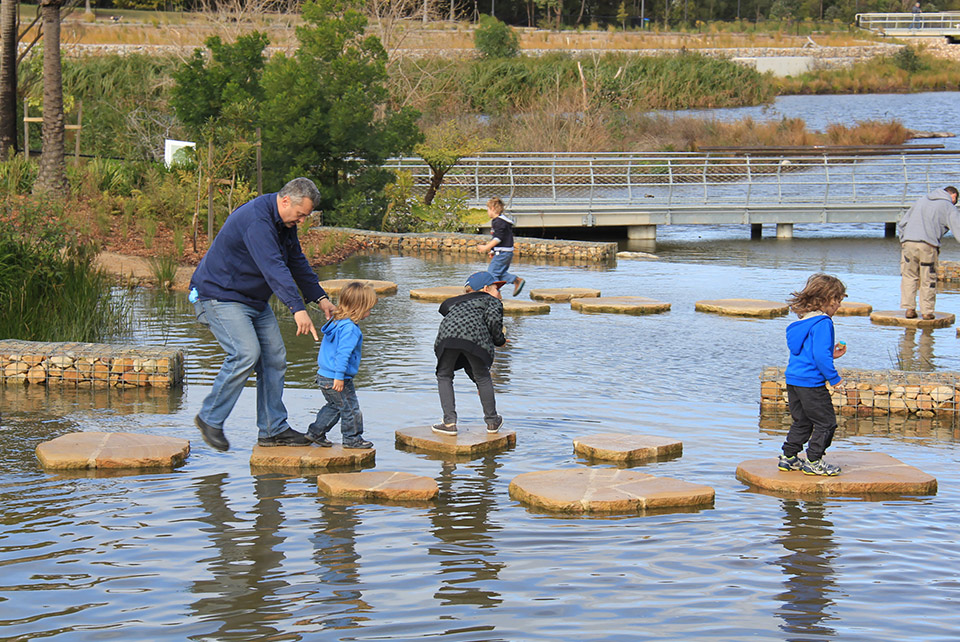 The project was funded by the City of Sydney and built in partnership with the Australian Government through the National Urban Water and Desalination Plan. The design team incorporated multidisciplinary specialists led by landscape architects Turf Design Studio and Environmental Partnership. The team’s expertise included hydrology, soils, ecology, engineering, and public art, as well as landscape design. Collaboration was central to the design process.

Turpin + Crawford Studio, David Knights (formerly Alluvium) and Mia Dalby-Ball (formerly Dragonfly Environmental) brought incredible verve, skill and openness of spirit to the project – their contribution cannot be underestimated. The City of Sydney also deserves special recognition for its curatorial rigour and commitment to quality on behalf of the community.

The integration of public art as water infrastructure is an integral part of the project. Water Falls by artists Jennifer Turpin and Michaelie Crawford is comprised of elevated terracotta troughs that fan out over the upper wetland to release, reticulate, and aerate the water via cascades. The artists also developed a series of “exhaust fans” that transfer water from the bioremediation “paddies” to the lagoons.

Native animal habitat was carefully considered and improved as part of the project. The wetlands have the highest population of native bird species in the local area, including 22 wetland species.

The Sydney Park water re-use project is a successful example of how to implement the principles of green infrastructure to create a unique environment for the community. One of the main reasons for this success was the process employed by the design team. The team was led by a landscape architect who orchestrated an intense and multidisciplinary collaboration that integrated design, art, science, and ecology.